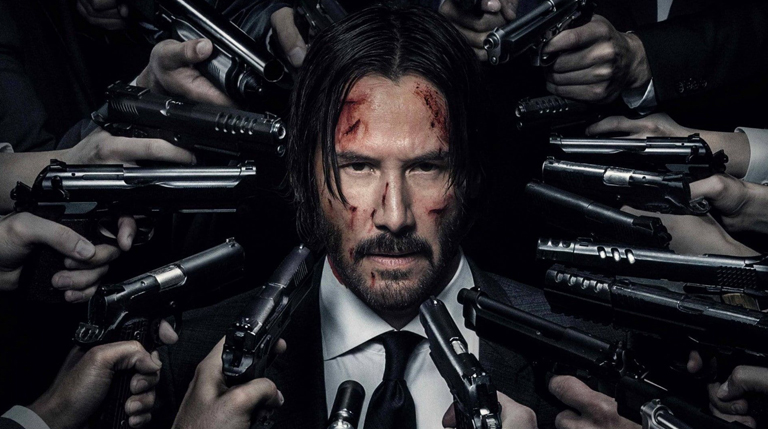 Few films portray firearms as well as the John Wick’s franchise. First released in 2014, John Wick (played by Keanu Reeves) tells the story of a retired hitman searching for the men who broke into his home, stole his vintage car and killed his puppy; the last gifts to him from his recently deceased wife. Sounds… well not that inventive, right?

That’s being said, John Wick isn’t a film famed for its storyline, instead, it caught the eyes of many gun aficionados for its range of firearms within, complementing the expert gun drills throughout its film series (John Wick I, II, and III). We can talk for hours about the pros and cons of John Wick – as a film, however we’re not here to do that — after all, we’re an airsoft shop, not a film blog!

What we are here to look at though is a selection of some of the best firearms shown in the original John Wick while offering you an airsoft equivalent!

The GLOCK 19 in 9 mm Luger is ideal for a versatile role thanks to its reduced dimensions when compared to the standard sized option. In addition to its use as a conventional service pistol, it is ideal for use as a backup weapon or for concealed carry purposes.

Similar in size and weight to the small-frame snub-nose revolvers it replaced, the GLOCK 26 fires the popular 9 mm Luger cartridge with minimum recoil and more on-target accuracy at a fast rate of fire. It’s an ideal backup for those who use the GLOCK 17 or GLOCK 19 for open carry, even more so since the larger 9mm magazines fit the G26 as well.

The MP10, also known as the SP10 or PXP-10, is a custom civilian commercial version of the MP5. It was produced by Special Weapon Inc and COHAIRE Arms. The MP10 has a UMP-like “upper” receiver. The handguard is enlarged to avoid hand burn and create a spot for attachments such as a Flashlight and a laser sight. The stock is removable and can be customised by using any MP5 style stock available on the market.

The Uzi is a family of Israeli open-bolt, blowback-operated submachine guns first designed by Major Uziel “Uzi” Gal in the late 1940s, shortly after the establishment of the State of Israel. It is one of the first weapons to incorporate a telescoping bolt design, which allows the magazine to be housed in the pistol grip for a shorter weapon.

The Coharie Arms CA-415 is essentially an American clone of the famous H&K416. Although the design is based on the AR-15 class of firearm (specifically the Colt M4 carbine family issued to the U.S. military) it uses a proprietary short-stroke, gas piston system from Heckler & Koch’s earlier G36 family of rifles.

The Ruger M77 is a bolt-action rifle produced by Sturm, Ruger & Company. The rifle features a traditional Mauser-style two-lugged bolt with a claw extractor and was intended to be used as a modernised Mauser 98, although a number of changes were made, with the only component not changed being the angled screw action.

You can see our full range of BB guns and airsoft guns on the Just BB Guns Ireland category product pages. We also have a large number of BBs and airsoft accessories all at great low prices.