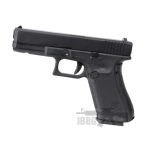 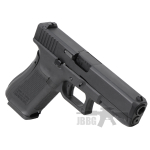 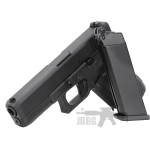 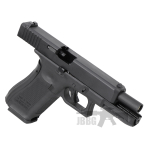 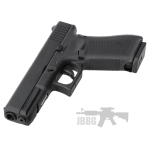 The WE gas blowback Airsoft pistol is a member of the G-Series range. A lightweight and durable polymer lower frame and an alloy slide make this pistol a lightweight yet durable sidearm.

EMAIL ME WHEN STOCK IS AVAILABLE

The Gas-Powered Pistol is a member of the ever-popular G-Series range and replicates the 5th generation of the real-world handgun, which makes the platform more efficient and comfortable. The main differences in the latest Gen 5 Pistols are aesthetic, having had the ergonomic finger grooves removed from the Pistol Grip after complaints they were uncomfortable, leading to an overall slimmer-feeling profile to the grip. The bottom of the Pistol Grip has been flared to make it easier to insert a magazine without taking your focus off the battlefield. Other aesthetic changes include the rounder front slide, which was to make it easier to perform press check (nudging the slide back to see if there’s a round in the chamber without unseating said round). The major interesting change to the Gen 5 is the addition of an ambidextrous Slide Release, which is great news for Left-Handed fans of the G-Series platform. The aggressive stippling/texturing and additional backstraps have been retained for this model, allowing for a good grip even when wearing gloves, and letting you change the profile of the grip to your liking.

The Pistol is made from the usual mix of Alloy for the slide and Polymer on the frame and has been assembled tighter than it’s previous counterparts with only minimal movement on the slide.  The white painted sight posts are clear and easy to use, especially in darker environments and the ever-faithful 20mm Pistol Rail is ready to take a Laser/Torch unit to help light the way. The outer barrel has an 11mm female thread for the addition of Suppressors and Tracer Units, provided you have an adapter or use a male threaded Suppressor. Be careful not to use a very heavy Suppressor, as this can cause premature Nozzle damage. As always, the underside of the frame features a Trigger Lock safety which can be nudged back to lock the Trigger in place and prevent the replica from firing. It also has the usual Dual Stage Trigger Safety which doesn’t let the Trigger be pulled unless your finger is properly placed. A Gear Style HOP Adjust can be found on the underside of the slide, accessed by pulling down on the two spring-loaded tabs at the upper-middle of the frame and knocking the slide forward and off the frame. This adjustment dial will change how much backspin is applied to the BB as it leaves the barrel, potentially increasing range and consistency when combined with the right settings and BB weight.

Included in the box is a 25rnd Gas Magazine which is filled with BBs using a Speedloader from the top or bottom of the magazine. The gas is inserted from the bottom Fill Valve on the base of the magazine. Be sure to keep your Pistol as warm as possible, as excessive shooting, an incorrect attempt at gassing the magazine, or use in extremely cold temperatures will have an adverse effect on the performance of the Pistol. Previous G-Series owners will be pleased to know that magazines are interchangeable between Gen 3, 4, and 5. If you’re looking for the latest addition to the infamous G-Series platform, which represents the refinement of an already pretty perfect pistol, then the WE EU17 Gen 5 is a solid choice.