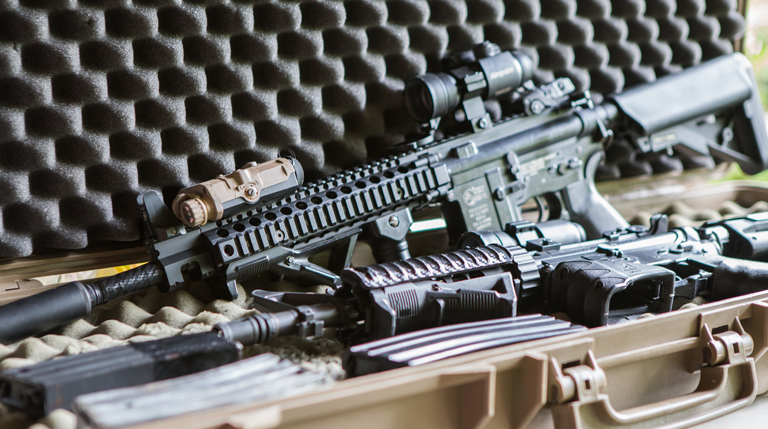 There’s a few criteria that define a “Training Weapon” and these were mostly established when Systema released their PTW. The goal behind the product was to create the ultimate airsoft guns. A gun that had the best possible performance in the most realistic package available. To do this they had to reinvent AEG technology from the ground up, incorporating a new motor design, a “planetary” gearbox with strong intermeshing gears running inside each other and a sealed cylinder system, housing the piston and main spring. The functions of the gun were controlled by a relatively sophisticated computerised microchip system, including cycle completion, bolt stop simulation on empty and error detection. This was all contained in a premium quality receiver set with 1:1 scale dimensions, intended to make the PTW near enough indistinguishable from a real M4 to look at.

All of these weapons promise a high degree of realism, compatibility with real AR parts and also ultimate performance on the field and it sounds like an easy choice to make, surely you’d get one if you could afford it? Hopefully we’ll be able to answer a few burning questions here…

Why would you want a TW?

There are a lot of motivating factors behind players buying into a TW platform. We asked around and responses were mixed and varied. Some wanted to try one out, out of curiosity. Some wanted to see if they lived up to the hype. Others were confident that they wanted the best available and others like the modular and realistic nature of how they can be disassembled and reconfigured. This, along with the purported infallible performance of the TW was one of the most powerful motivations behind going all out with one.

I think many airsofters and gun collectors alike really enjoy the “kit” aspect of having airsoft guns. Not as in collecting lots of tactical nylon, but having a peli case with sections of foam cut out specifically for each piece of the set. Just look at how popular RIS is, we love it. You can put things on, take things away, reconfigure and personalise to your heart’s content and thanks to the modular nature of the TW, something carried over from the real AR15 design, you can do the same with your entire weapon. We spoke to some TW owners who had one or two “lower assemblies” but for each one, they had 3 or even 4 “upper assemblies”. These can simply be dropped into place in a matter of seconds, rapidly converting a short CQB blaster into a long-barreled SPR or marksman’s rifle. You can sort of do this with other AEGs but it’s not the same and it’s a lot fiddlier. With a TW it’s literally plug and play.

OCD and collector impulses aside, a huge argument for running a TW is the performance. Thanks to their powerful motors and sophisticated gearboxes, TWs have amazing trigger response and under the right conditions, shoot fantastically well. Because of their heightened build quality, TWs generally “feel” a lot more solid and consistent too which is a big part of the attraction.

Are they a “game changer”?

Running a TW doesn’t make you feel inclined to play in a different manner. Relying on a fast trigger response makes semi auto shooting a lot more effective. Indeed TWs don’t really respond well to whopping great bursts of full auto fire and are known to overheat and fail when used in such a manner. Mid or Low capacity magazines are pretty much all you’ll find used by the majority of TW owners, ranging form ultra realistic 30 rounders to a maximum of about 150 rounders. This in itself is enough to pull many of players away from the mindset of spray and praying and closer to taking aimed and accurate shots. You’ll also have to get used to making tactical magazine changes a lot more frequently. These facts coupled with the empty magazine cut-off detection makes for a more exciting challenge if a more realistic game is what you are chasing.

The effects of using a TW on the field are only really something that will be apparent to you. In the past we’ve heard boastful comments about other players “knowing they have been hit by a Systema” or words to that effect. These are nothing short of nonsense. As soon as a BB leaves the gun, it’s simply tumbling through the air just like any other and although the game might have been changed for you, it’s not a great deal different from your opponents end.

If you thought buying up to €1800s worth of Systema PTW would mean you never had gun troubles again, you’ll be sorely disappointed. We do know of a couple of guys that are running 2008 model PTWs and have never had them break down, but these instances are rare. Because players like to get the maximum out of their guns, the use of high current, high voltage battery packs is proliferate and these do take a toll on some components. Many times motors are the cause of the issues and in particular, the bushings found within them. These parts should be viewed as a “wear and tear” component and they will need replacing periodically.

Another quirk of the TW platform is how fussy they can be with ammo. You’ve made an investment in the gun itself and you’ll have to continue to invest in BBs themselves to ensure you get the best out of it. Not all BBs are created equal and you’ll need to understand this more than any other type of gun owner. Some will feed beautifully in your TW but others might misfeed, get jammed or in the worst-case scenario, get “chopped”. Chopping is when the nozzle fails to load the BB into the hop chamber properly and instead of pushing it forward, it catches it halfway between the hop chamber and the hop itself. This usually splits the BB into tiny fragments, spraying them down the barrel of the gun. They can find their way into the cylinder of the gun through the nozzle where they get smashed into a fine, slightly abrasive paste which will ruin your air seal. Unfortunately, we can’t recommend anyone type that will work in all guns. For a start there are many and each gun is different, plus manufacturers make tiny changes and even batch to batch, BBs can vary. Trial and error is the only way and one thing is for sure, you’ll be wanting to take your own supply of known ammo with you when you visit sites.

Depending on how outgoing you are, you might also find the reputation of the “Systema” precedes you. Thanks to the high tolerances and different motor, the TW makes a characteristic noise and one more than one occasion, we’ve had a player stop in the middle of a firefight to ask a question or relay a myth they have heard about them. Sure, most guys will simply be interested in finding out how they shoot and perhaps asking the questions we’ve outlined here. Other times you’ll probably find yourself justifying your purchase to a player that finds it outrageous that anyone would spend more than €200 on a toy gun “that still only shoots BBs”. Indulging in these conversations is something you’ll probably have to get used to.

Training weapons are definitely an interesting avenue to look down within airsoft, but they most certainly aren’t for everyone. They work very well when they work, but they are temperamental, highly strung and have a horrible habit of throwing a tantrum right when you’ve just been telling your mates how great it is. The good news is that the TW game used to be prohibitively expensive to buy into, but these days with the advent of cheaper clones, it’s a less expensive venture. Instead of throwing four figures down, you are looking at closer to the €400 mark which isn’t a figure to be dismissed of course, but it’s a lot more achievable for many. You just have to ask yourself, are you willing to let yourself get bitten by the bug?