The Need to Protect Your Airsoft Guns with a Tactical Hardcase 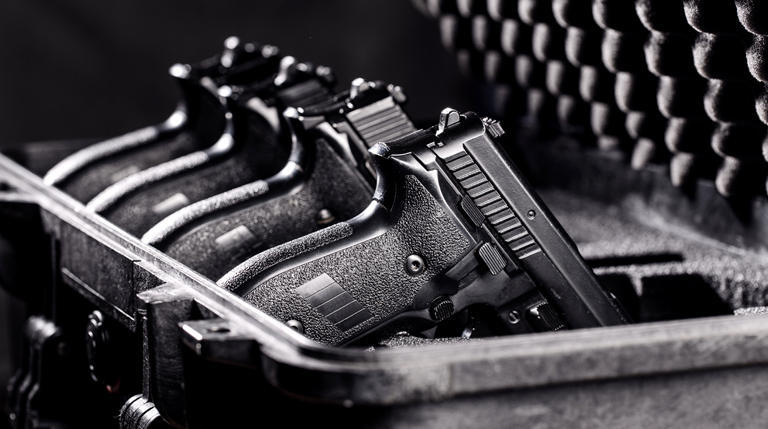 The Need to Protect Your Airsoft Guns with a Tactical Hardcase

Hard cases, in our opinion, are the best options for transporting airsoft guns and all RIFs to and from a specific destination. Not only do they look a lot better (which is always a benefit if you get stopped by the local authorities) but they also provide a whole deal more in regards to protection. Most are made of a hard plastic material; although there are some cases that are aluminium, and they’re all closed by a series of clasps, with some offering the capability to be locked via a padlock.

But why exactly should you protect your airsoft gun with a hardcase? We look at 5 reasons why you might want to invest in a hardcase sooner rather than later!

Let’s be honest with ourselves here – when going to and from games, sometimes we do not take enough care with our airsoft guns. Many a time we’ve seen exhausted players simply throw their AEG in the back of their car and bury it under some equipment so it’s not on show. Simply put, do better! Airsofters spend hundreds, if not thousands of pounds on their beloved AEGs, so spending our another chunk of cash on a protective hardcase shouldn’t even be a question, it should be a necessity. Having a dedicated hardcase to protect your airsoft gun is a must in our eyes, and it will massively reduce the chance of accidental breaks during transport!

While owning an airsoft gun in Ireland is not restricted, and no license needs to be held to purchase one (more on Irish airsoft laws can be found here – https://www.justbbguns.ie/the-law/), there are certain rules that have to be followed in regard to the handling of an airsoft gun. As noted in the Criminal Justice Act 2006 “Airsoft guns are now classified as Realistic Imitation Firearms (RIF) and cannot be carried in public at ANY TIME. If you are carrying a RIF to your car, it MUST be in a suitable case”. In short, this means you’ll need to look for a suitable gun case to transport your RIF to and from your local skirmish field. Furthermore, we would suggest transporting any purchased RIFs (mainly second hand purchases which do not have a box) in a gun case as well.

Not only do hardcases make transport easier, but they also make storage easier. If you’re like us and have multiple airsoft guns, hardcases will stack on top of each other to reduce the floor space taken up in either your house, garage or ‘war room’. Furthermore, due to their rigid nature, you again will not have to worry about any accidental damage during storage, instead you can rest assured that your airsoft gun is safe and sound in its hard plastic protective case!

There’s no doubt in our mind that airsofters like looking the part, and hardcases certainly look ‘Operator as F$£%’. Throw a bunch of manufacturers stickers on it and you’ve got yourself a hardcase that not only does its job admirably, but also looks good while doing so. Furthermore, should you invest in foam cut outs for your case (in which sections are cut out to house your airsoft gun, magazines, optics and other weapon related objects), you’ll have everyone clamouring over you at the safe zone!

So, we’ve highlighted why hardcases are, in our opinion, a necessity for any airsofter, but what hardcase would we suggest? And we’d look no further than SRC’s P42 and P49. The SRC P42 and P49 are, in our opinion, some of the best hard cases on the market. Both hardcases are identical in construction, making use of a solid ABS material which features a reinforced carry handle for ease of transport. Furthermore, the case is secured via four clips which keep the case secure, as well as having a number of security holes to further secure the contents via padlocks. In regard to sizing, the P42 is 105cm long, making it perfect for any M4/AK sized airsoft gun, while the P49 measures in at 68.5cm long, lending itself well to a number of bullpup type airsoft guns such as the FAMAS or Steyr AUG. What makes the SRC P42 and P49 even better is the price, with more than enough change from 100 Euro to throw at some other goodies. At current, the P49 is available for 59.99 while the P42 retails for 64.99 – 69.99 dependant on colour. In closing, the SRC P42 and P49 are brilliant examples of hardcases and very much our pick of the bunch were we to be spending our hard earned money on a hardcase. For more information, you can find the P42 here (www.justbbguns.ie/src-p42-case) and the P49 here (www.justbbguns.ie/src-p49-case).

You can see our full range of airsoft guns, airsoft rifles or airsoft pistols on the Just BB Guns Ireland category product pages. We also have a large number of BBs and airsoft accessories all at great low prices.