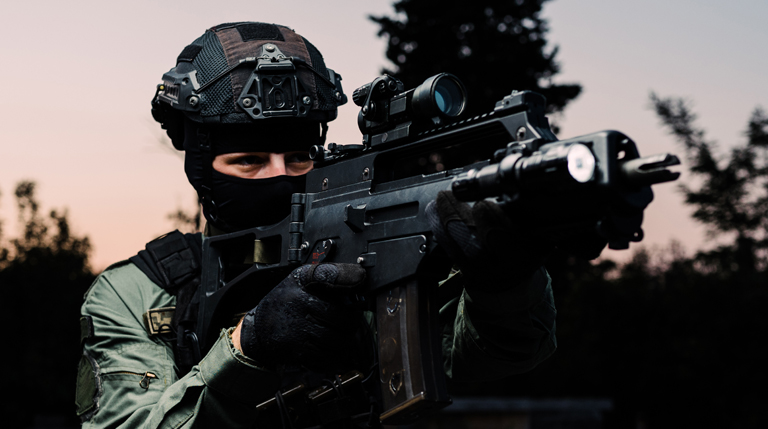 One of the biggest questions we get asked is ‘is XYZ gun any good?’, and rightly so – our customers want to make sure they’re getting the best bang for their buck. With that in mind, over the next few months we’re going to be taking a look at some of the most popular searches on our website and asking the question – is it any good? This month we look at the SRC G36C Generation 3 airsoft guns.

The Heckler & Koch G36 (Gewehr 36) is a 5.56×45mm assault rifle designed in the early 1990s by German company Heckler & Koch as a replacement for the heavier 7.62×51mm G3 battle rifle. It was accepted into service with the Bundeswehr in 1997, replacing the G3. Since then, it has also been a popular export, and the G36 has seen active service in military and police units in several countries, including Germany, Spain, and the United Kingdom. The G36 is gas-operated and feeds from a 30-round detachable box magazine or 100-round C-Mag drum magazine.

In 2012, the G36 was found to suffer from severe accuracy problems when the weapon overheated, which prompted the search for a replacement. In 2017, the Bundeswehr launched the System Sturmgewehr Bundeswehr, a program to find a replacement for the G36. The weapons put forth were the Heckler & Koch HK416, Heckler & Koch HK433, and the Haenel MK 556.

SRC, short for Starrainbow Company was founded in Taiwan in 1993 as a wholesale company focusing on the supply of domestic toys. Shortly after, SRC took their first foray into the airsoft market following the growing interest in Airsoft throughout the globe, selling imported replicas. In the same instance, SRC started putting plans into place to design and manufacture their own range of airsoft replicas in a bid to become one of the world’s best airsoft producers.

SRC’s first products were a range of modification kits and accessories for existing airsoft brands. Over time SRC slowly developed into the powerhouse they are today. SRC now has a wide range of products available, all of which go through a rigorous quality test before being shipped to retailers like ourselves.

The G36 is an iconic firearm in the real world, produced by Heckler & Koch to replace the G3 battle rifle. Accepted into service with the German Bundeswehr in 1997, the rifle has been a mainstay within the German military since. Due to this, the G36 has always been a popular replica within the airsoft community, and various companies have manufactured their own versions to fill this demand. In our opinion though, none quite match up to the SRC G36 Gen3.

The SRC G36 Gen3 incorporates a polymer handguard that comes equipped with three metal rails for attaching accessories, while also doubling up as the battery storage. It also features a folding stock that latches securely without any creaks or wobbles, which makes it easily transportable as well as brilliant for CQB situations in which a full-length rifle may be too long.

IS IT ANY GOOD?

So, as always, and the general reasoning behind these blogs – is the SRC G36 any good? Well before answering that, it’s important to determine how we specify ‘any good’. Now obviously at £150, the SRC G36 is not going to perform as well as a Systema PTW – but that’s like saying your reasonably priced car isn’t going to outperform a Ferrari. What we have to do here is look at the outlay and then ask whether we think it’s a fair price for a good product. Pretty self-explanatory, really, but you’d be surprised…

So, is the SRC G36 Gen3 any good? Honestly, you’ll be hard-pressed to find a better example on the market at the same price point. The SRC G36 Gen3 is the perfect AEG for those looking to break the status quo of AR-a-likes that are in abundance on the skirmish field. Designed around a Nylon Fiber body to ensure reliability in the most rugged airsoft play conditions, the G36 Gen3 AEG is lighter, durable, and more maneuverable than the majority of its metal counterparts.

However, with that said, this has caused some other issues in the process. You’ll be unable to place a generation 2 gearbox into the SRC G36, and due to the barrel assembly and takedown being different from Tokyo Marui’s offering (which most other companies cloned subsequently), a lot of 3rd party parts will not fit the Generation 3 model.

In all honesty, though, we’re massive fans of the SRC G36 and out of the box, it performs admirably. Having got hands-on with the SRC G36, it didn’t feel like it would need much tweaking, and the range findings showed as much. With an average FPS of 324 over 10 shots, it just sneaks under the upper limit for most sites in the United Kingdom and the grouping of the 10 shots was pretty spot on for an AEG that hasn’t been tinkered with.

If your looking for great airsoft guns or low-cost BB guns in Ireland take a look at Just BB Guns the largest online airsoft retailer in Ireland.