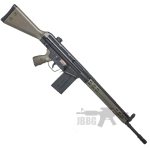 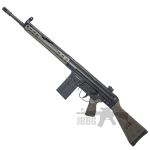 This is the H&K WE Licensed H&K G3A3 GBB Airsoft Rifle with a full blowback and gas magazine.

EMAIL ME WHEN STOCK IS AVAILABLE

This H&K G3A3 is quite possibly one of the most well-known rifles in the world, seeing use in the hands of military and police in over 80 countries, and close to 8 million units produced worldwide. This iconic rifle is well known to many, collectors and enthusiasts alike, so it’s no surprise that we still see them pop up in the Airsoft world to this day. This H&K licensed G3A3 GBB rifle by WE-Tech is very impressive, with a receiver made completely from stamped steel adorned with H&K G3 roll marks adding just that extra bit of detail and authenticity. The realistic blowback functionality carries weight with the full-travel bolt assembly.

ABOUT THE REAL WEAPON

The origin of this rifle can be traced back to the final years of World War II when Mauser engineers at the Light Weapon Development Group (Abteilung 37) at Oberndorf am Neckar designed the MKb Gerät 06 (Maschinenkarabiner Gerät 06 or “machine carbine device 06”) prototype assault rifle chambered for the intermediate 7.92×33mm Kurz cartridge, first with the Gerät 06 model using a roller-locked short recoil mechanism originally adapted from the MG 42 machine gun but with a fixed barrel and conventional gas-actuated piston rod. The Gerät 06 would later be adopted as the StG 44 (Sturmgewehr 44 or assault rifle). It was realized that with careful attention to the mechanical ratios, the gas system could be omitted. The resultant weapon, the Gerät 06H (the “H” suffix is an abbreviation for halbverriegelt or “half-locked”) was assigned the designation StG 45(M) (Sturmgewehr 45(M) or assault rifle) but was not produced in any significant numbers and the war ended before the first production rifles were completed.

The G3 was the standard rifle of the German army for several decades. A total of more than 50 countries during the last 40 years issued it to its forces, could be seen in every main conflict worldwide, Today, G3 and a wide variety of derivative firearms are still in service or manufactured in many countries, with different purposes and calibres, such like 9mm MP-5 submachine guns, 5.56 mm HK 33 assault rifles, 5.56mm and 7.62 mm HK23 and HK 21 machine guns, PSG-1 sniper rifles etc.

Until 1995 the 5.56x45mm NATO calibre G36 rifle replaced the general firearm of Bundeswehr (Germany), the G3 in various modifications served as a general issue firearm and become an icon of 20-century 7.62mm calibre firearm, not only for German Armed forces but also for many other countries.