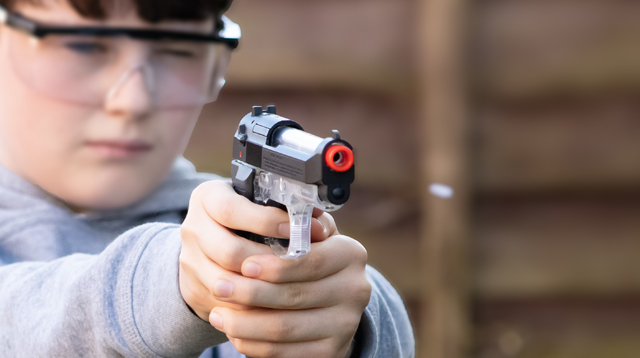 It’s no secret that airsoft is a lot of fun – in fact, in terms of past times, airsoft is a great hobby to get involved in. Not only is it a great social environment with the majority of airsofters more than happy to talk to you about their latest gun or give you a hand setting up your airsoft gun for the first time, but it is also brilliant for fitness levels due to the nature of the game.

Taking the ideals of social interaction and fitness, and it’s no surprise that children often gravitate towards the idea of playing airsoft, especially when you take into account that a large majority of kids will spend a copious amount of hours playing video games such as Call of Duty or Battlefield; both of which lend themselves well to the idea of re-enacting your favourite games on the skirmish field.

But just how would you go about getting into airsoft as a kid? Well this can be especially difficult as a younger airsoft player, especially if you do not have family members who are already involved in airsoft. This month we’ll be taking a look at the various things you will have to take into account when playing airsoft from a younger age.

When it comes to playing airsoft, there is one thing you’re going to need regardless of the weather, where you’re playing or what equipment you’re wearing – an airsoft gun. As this article is exploring younger airsofters, we’ll be presuming that you’re at least under 16 years of age, meaning there are a few issues you’re going to run into when buying your first gun.

First of all, as a minor, you’re going to have to convince your parents to purchase your first airsoft gun for you as the legal age for buying an airsoft gun is 18. Furthermore, presuming no one in your family plays airsoft, you will likely be best off purchasing a two-tone airsoft gun as your first purchase. Two-tone airsoft guns are simply brightly coloured airsoft guns – usually painted in a neon colour, although there are now clear plastic variants of most airsoft variants.

While you could push for a RIF (essentially an airsoft weapon that is realistic looking) due to Ireland not having a governing body like the United Kingdom, buying two-tone offers your parents the peace of mind that you are not going to potentially mess around with it outside of airsoft. Treat it as a trust exercise – bear with using a two-tone for a couple of months and show that you’re treating it as an airsoft gun as opposed to a toy and you’ll get a long way.

Another thing to take into account is the different types of airsoft gun. Most airsoft rifles come in three different configurations – spring loaded, electric powered or gas powered. Personally we would recommend going down the spring loaded route to begin with, as again, it will teach you a lot about discipline. Maybe look at investing in a very cheap springer to begin with, and the move onto an electric powered rifle further down the line!

FINDING A SITE TO PLAY AT

After you’ve purchased your airsoft gun, the next step is finding a site to play at, which can be tricky as a younger player. A lot of airsoft sites will only allow younger players to play with parental supervision, meaning a parent would have to play airsoft as well with you and not simply be present at the site. This can cause issues for younger players, but it is something you will no doubt have to contend with. At this point you have two options – you either convince your mum or dad to get involved in airsoft with you or you begin looking towards games specifically ran for younger players.

If you’re able to convince a parent to play airsoft, congratulations! You’ll no doubt have a whole heap of fun with your parent/s and create memories that will stick with you for a long time – I know I do! If that fails and you’re unable to find an airsoft site operator that will allow you to play at regular games, you’re going to have to explore games specifically for younger players. While these are often difficult to find, they do pop up occasionally – and if your local site doesn’t have a ‘young guns’ day, then there’s nothing stopping you trying to convince them to put one on!

If you’ve managed to overcome the first two hurdles, you’ll be set within the world of airsoft! Now remember, while airsoft is seen as a game, it can come with some serious injuries and airsoft guns and your fellow players should always be treated with respect. Now go and enjoy yourself!